Edward Gorey: Gift to the Archives 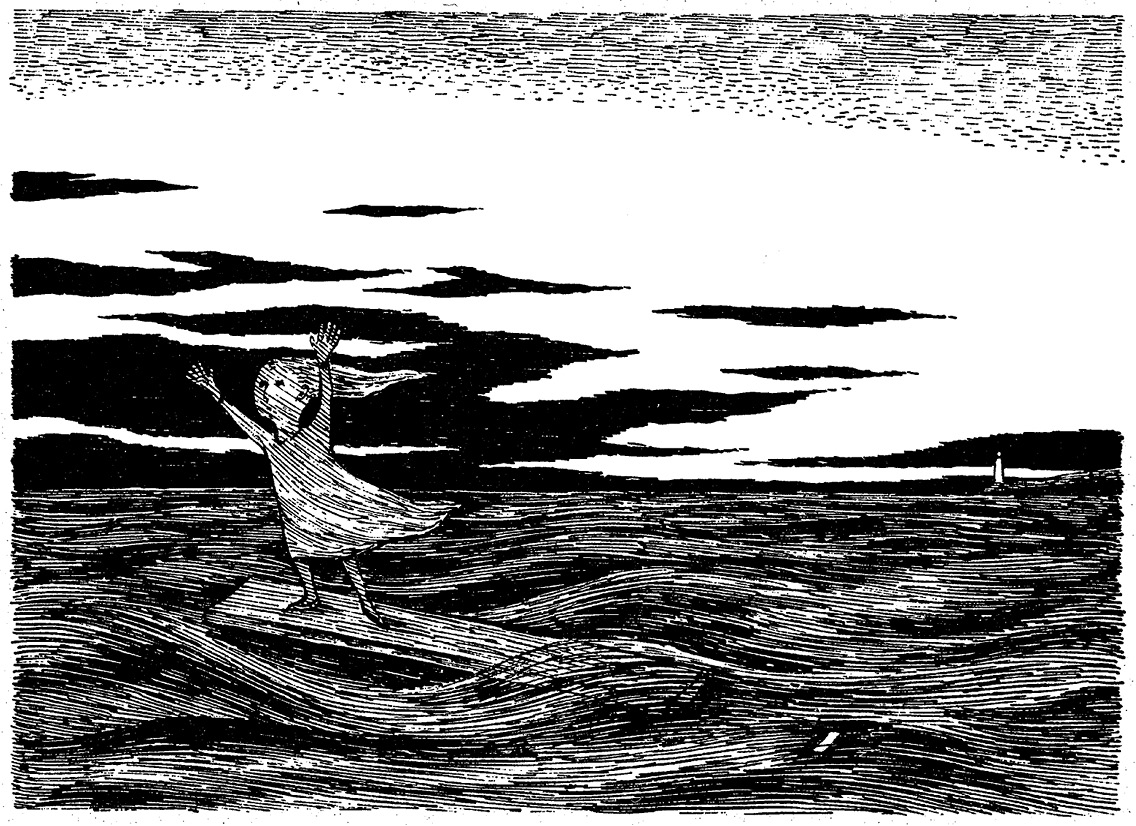 Elegant Enigmas: The Art of Edward Gorey
and
G is for Gorey—C is for Chicago: The Collection of Thomas Michalak

A Special Thank You 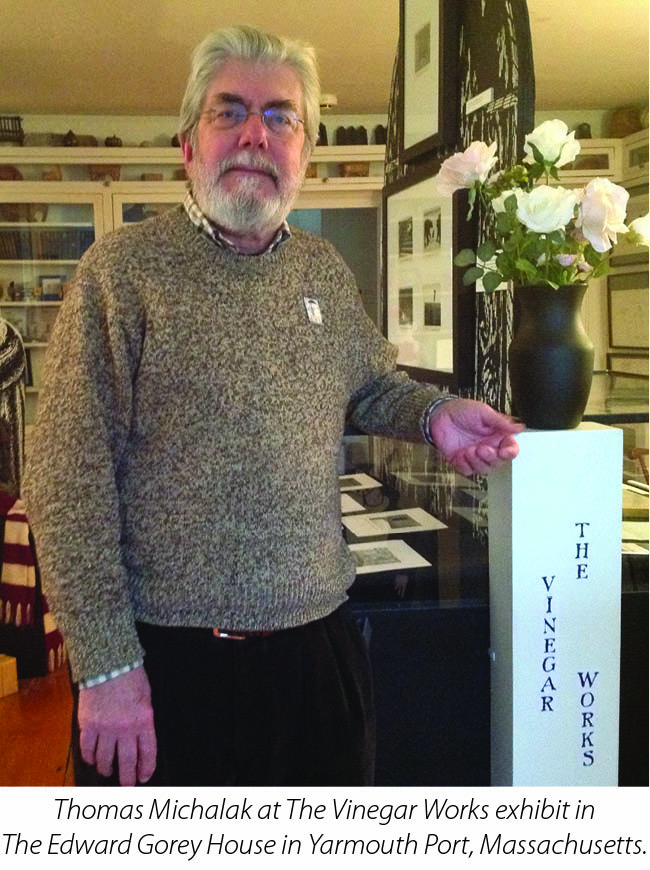 I am pleased to announce the establishment of the Thomas J. Michalak Edward Gorey Collection in Special Collections in Cudahy Library. Mr. Michalak, a loyal alum of Loyola University Chicago (class of 1963), has generously given more than 1,100 items from his personal collection of Edward Gorey’s published works, illustrations for book jackets and in magazines, posters, prints, etchings, ephemera, and merchandise to the University Libraries. The new Gorey Collection, a portion of which will be on display at LUMA February 15 to June 15, 2014, as part of an exhibition entitled G is for Gorey—C is for Chicago: The Collection of Thomas Michalak, is just the latest generous gift of the donor. In 2009, Thomas and Jo-Ann Michalak gave a very fine collection of rare books and broadsides illustrated by George Cruikshank, the well-known and much admired 19th century British caricaturist. They continue to add to this wonderful collection and have also established an endowment fund in support of the library’s Special Collections. We are indebted to the Michalaks for their thoughtfulness, ongoing generosity, and dedication to Mr. Michalak’s alma mater.

The Gift of Gorey: An Interview with Thomas J. Michalak

By Nicole Brodsky, Assistant to the Dean for Programming & Outreach

In celebration of the exhibitions Elegant Enigmas:  The Art of Edward Gorey and G is for Gorey—C is for Chicago:  The Collection of Thomas Michalak and of the extraordinary gift given to the Loyola University Chicago Libraries, we present a special interview with donor, Loyola alumnus, and Friends of the Loyola Libraries Board member, Thomas J. Michalak.  Below Mr. Michalak shares his thoughts on the joy of collecting, the fascination with Gorey and the art of giving back. 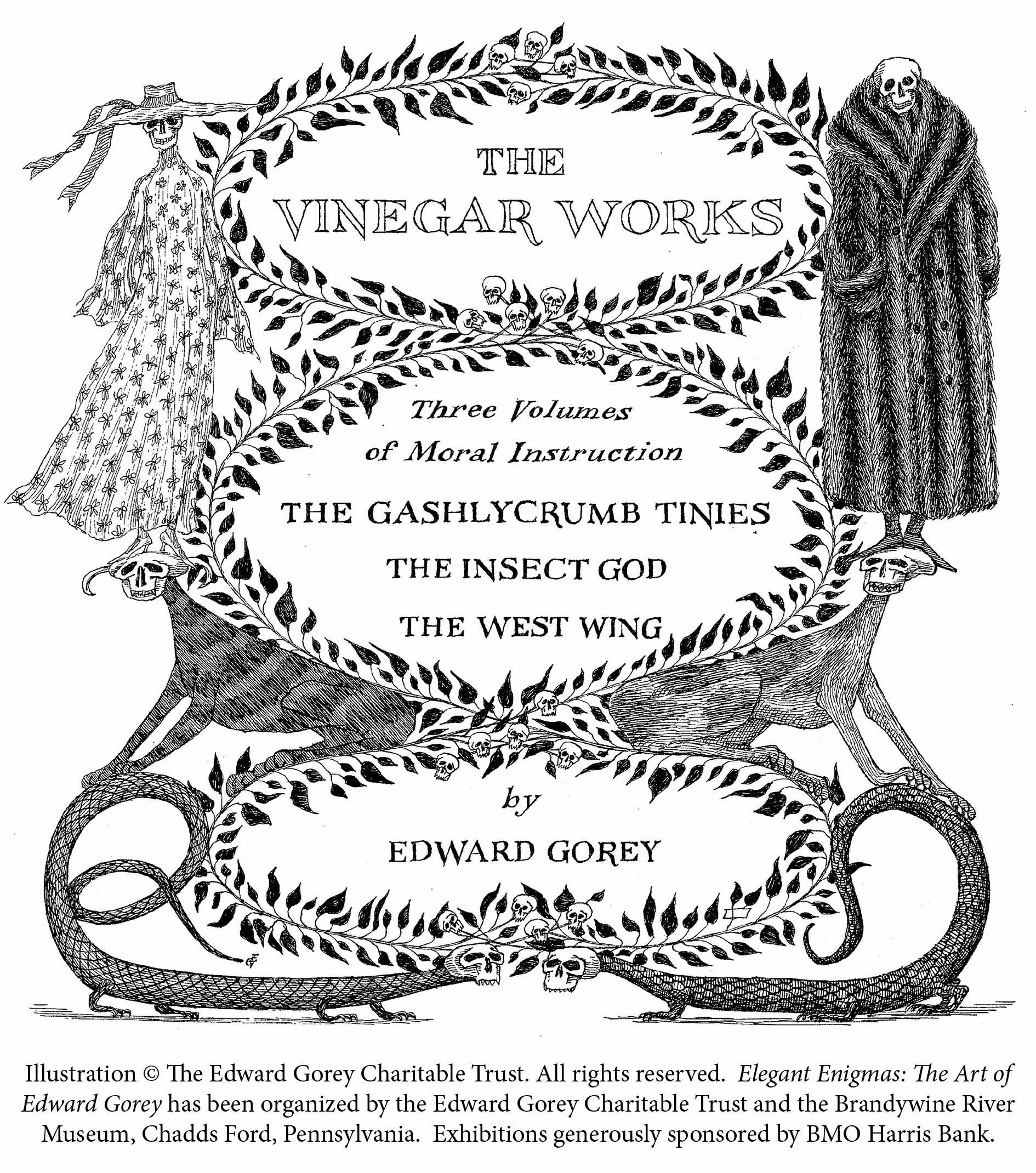 How did you start collecting Gorey?  –  Sometime in the early 1970s, a friend of mine, Breon Mitchell, who went on to become head of the Lilly Library at Indiana University, Bloomington, showed me The Vinegar Works.  I recall that he even gave it to me and suggested that Edward Gorey was a good thing to collect.  He was, of course, correct.  I was a subject specialist in political science and economics at the University Library, but didn’t know much about rare books.  Breon is a serious collector and Jo-Ann and I socialized with him and his wife Lynda and I learned a bit about collecting rare and special materials from him.  So he got me started and when I moved to New York in 1975, I was able to visit the Gotham Book Mart and New York book stores frequently, and have been hooked ever since.
What about Edward Gorey’s art and writing has kept you engaged as a collector over the decades?  –  I was interested in political humor and was collecting Thomas Nast at the time and I really liked Gorey’s sense of humor and wit, albeit sometimes subtle, so I started collecting Gorey because I liked his sense of humor.  Building collections is in my blood growing out of my work at Indiana, so when I get interested in something, I try to build a collection.  Jo-Ann and I started collecting to furnish our home in the late ’60s and our collecting grew from home furnishings to rug beaters, to art pottery, to Mason’s English porcelain, to Victorian tiles while at the same time collecting books by and about George Cruikshank, Regency England, and Edward Gorey.  Wherever Jo-Ann and I traveled, we visited antique shops and bookstores.  Jo-Ann started to collect decorated publisher bindings while I rooted around for Cruikshank and Gorey, so together we both developed our love for collecting.
In the two exhibitions coming to Loyola University in February 2014, Elegant Enigmas:  The Art of Edward Gorey, by its very name, is focused on Gorey’s art.  G is for Gorey—C is for Chicago:  The Collection of Thomas Michalak is focused on the artist, the man and really the human being.  What would you like others to know about Edward Gorey, the person?  –  He was a voracious reader and often read a book several times over the years.  He liked to cook.  He loved cats.  He was an inveterate collector of objects that interested him whether they were salt and pepper shakers, graters, engravings, or books.  And lastly, he worked very hard at his writing and art as a freelancer taking commissions for book jackets, magazine illustrations, working with the Gotham Book Mart, whatever it took for him to make a living.
The best insights into Edward Gorey can be found in Floating Worlds, The Letters of Edward Gorey & Peter F. Neumeyer and several of his lengthier interviews.  I would also recommend “Edward Gorey:  Proust Questionnaire” that appeared in Vanity Fair in October 1977 (reprinted in Ascending Peculiarity).
Gorey was not a fan of attributing meaning to things, but such is human nature.  What do you think explains the appeal of his work to people of all ages?  –  Let me answer with Gorey’s undecipherable motto:  “O the of it all”.
Or to paraphrase Gorey’s comments when asked your question, the appeal and meaning of his work is in the eye and mind of the beholder and that’s just fine.
If you could share dinner with one of the characters created by Edward Gorey, who would it be and why?  –  It would have to be a couple, Ogred Weary and Mrs. Regera Dowdy so we could talk about The Beastly Baby and The Pious Infant.  I recently re-read The Pious Infant and it reminded me of the Baltimore Catechism and the Dominican nuns who taught me at St. Clare de Montefalco school (55th and Washtenaw).  Gorey was baptized as a Catholic but did not practice.  I would like the opportunity to talk to him about his religious leanings and beliefs.
For many collectors, the ultimate joy comes in sharing one’s collection with others.  What made you decide to gift your collection to the Loyola University Chicago Libraries?  –  Lots of reasons.  I have developed a good relationship with the Libraries in the past few years when I began donating my collection of British caricature and was looking for a home for Gorey.  Dean Seal was responsive when I suggested donating my Gorey collection.  I was unable to identify a major collection in Chicago institutions and felt Gorey should come home to Chicago.  Rather than wait, I chose 2013 for personal tax reasons.  From the outset I hoped that Loyola would bring Elegant Enigmas to LUMA and when Pam Ambrose offered me the opportunity to do G is for Gorey—C is for Chicago:  The Collection of Thomas Michalak it was a collector’s dream come true.
In making this extraordinary gift, what idea do you hope to foster in today’s Loyola students and those of future generations?  –  First, I believe that Gorey’s art and writings will be the subject of serious scholarship in coming years, and as the collection is fairly comprehensive, Loyola undergraduates, graduate students, faculty, and other Chicago researchers would be able to use it.  And that will also be true of my other collections when they are gifted.  I want to help build the Libraries in support of teaching, learning, and scholarship.  Second, I believe that one should give back to those who influenced you and helped shape your values and your life.  I have always been grateful for my Jesuit education at Loyola as it taught me how to think critically, so I’m giving back and I hope I set an example for others.