Welcome to Games at Lewis Library

Games are not just fun.

Games are educational. They can be tools of learning, a way of training your mind: to think; to think logically; and to accept and deal with new issues and scenarios.

Games are  social. They can start conversations; help people relate on many levels,  and build alliances.

Games are profitable. For those who code and create games, there are jobs available: marketing, writers, game designers, computer coders, etc.

Games are therapeutic. They can help us decompress and relieve anxiety. 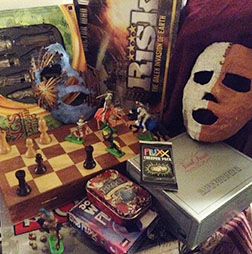 Below are listed a few basic types of board games.  This list may contain some overlap of titles because as games become more complicated there are more elements or mechanisms that define game play.

Area Control (Area Influence or Area Majority) - Area Control and Area Influence are mechanisms used in board game design. Typically area control is awarded to the player who has most or a majority of pieces in any given area.

Bluffing - Games of deceit and misdirection, where you tell a lie to stay in the game or throw suspicion on another player.

Civilization Building - Often deemed a mechanism of a game, civilization building is about control of natural resources, roads, ports, transportation, land, agriculture and industry.  The play that controls all these things can build an lasting civilization or empire.

Co-Operative - In cooperative board games, players work together in order to achieve a goal, either winning or losing as a group. This type of game can strengthen team building skills.

Deck Building - These are ard games where construction of a deck is the main focus of gameplay. It is similar to collectible card games (CCGs) in that each player has their own deck. However, unlike CCGs, the cards are not sold in randomized packs, and the majority of the deck is built during the game, instead of before the game. Typically, the cards provide a type of game currency which allows players to buy more cards to add to their decks. (Magic the Gathering requires you build the deck prior to play.)

Card Drafting - Card drafting games are games in which players pick cards from a limited subset, such as a common pool, to gain some advantage (immediate or longterm) or to assemble hands of cards that are used to meet objectives within the game.

Dice Drafting.- It’s a mechanism I think adds a lot of strategy and randomness, but not too much, to a normally mundane process of gathering resources.  Dice drafting tends to be a mechanism that uses dice as resources, or actions the players get when choosing which dice the want.  Normally, one or all of the players will roll dice then put them on the board or middle of the table taking turns choosing each die.  The dice will usually have a picture associated with it based on what you will receive.  That is the randomness, you never know what will be available each time the dice are rolled.  The strategy is knowing and getting the most important thing for you when it is available before others get it.

Hidden Traitor - Similar to a cooperative game, hidden traitor games, players are working to complete a goal, but at least one player is deceiving everyone and working against the "collective" goal. The hidden traitor will lie, implicate others, and do anything to win, and keep their ultimate identity and agenda secret.

Worker Placement - This type of is a game of strategy often using resource management (skills which could be applied to a business career):